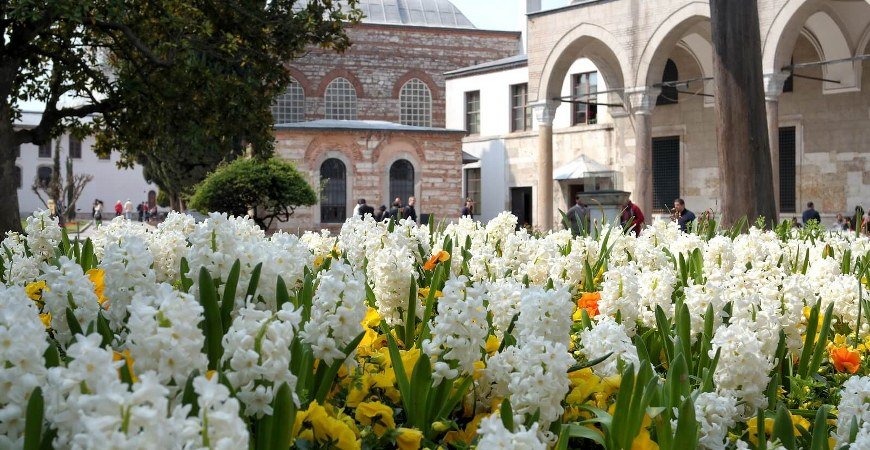 The Conqueror’s New Palace lost as many sections in the course of its long history. When the rulers of the empire moved to Dolmabahce and other places elsewhere in the city, their old home came to be known as the Topkapi, or Cannon Gate, Palace. They now visited it only on the occasion of the ceremony of the Sacred Mantle (the Prophet Mohamed met’s mantle) during the holy month of Ramazan. The treasury remained within its vaults, which necessitated the maintaining of a strong guard within the gates. However, little attention was paid to the buildings themselves, which were allowed to become dilapidated. In 1924, after the declaration of the Republic, the Saray was turned into a museum and its gates were opened to the public. Many ruined buildings in this vast enclosure of nearly 700,000 sq. meters were restored, abandoned rooms and kiosks were refurbished, tens of thousands of works of art were classified into various museum sections, thousands of books arranged to form a library and hundreds of thousands of documents were classified and cataloged. The entrance to this Museum, with its majestic historical past, lies behind the Mosque of Ayasofya, past the beautiful fountain which Ahmet III built in 1729, through the Bab-i-Humayun, the Imperial Gate, which leads into the first court, known, as Ow court of Processions. At the other end of this court, a gate surmounted by two peaked towers leads into the Museum.

Silver Section
A great deal of the sultans’ silver was sent to the mints to be melted down so that the items displayed in This section are all later than the seventeenth century. Together with the examples of the work of English, French and other foreign silversmiths to be seen in ibis section, there are also examples of goldsmiths’ work. The objects exhibited give an idea both of the workmanship of the Turkish silversmiths and of the manner of living of the Turks in different periods of history. There is a great variety of these objects, from It) coffee cups, candlesticks, lanterns, mirrors, trays, dishes, coolers, bird – cages, jewel cases and water jugs to dust shovels and funnels. A collection of objects made of gilt, and copper with embossed flower designs (a kind of work known as tombak, is housed in the same hall.

Copper Section
The kitchens of the Seraglio were divided into three sections, referred to as the lower, middle and upper kitchens. We now penetrate into the upper kitchens or the Helva House (a popular Turkish sweet) where the food of the palace elite was prepared.’ The walls of this building are covered with flowered tiles. Here can be seen the kitchen utensils of the Saray, from the enormous cauldrons to an infinite variety of pots and pans, covered dishes and round trays, sieves, mortars, and ladles. On some of these, the inscriptions giving the name of the maker also include the date. Also on display here are dishes, coffee-grinders, knives and spoons made of meerschaum or S(Suleymaniye stone. In one showcase around eighteenth – century silver tray is set with a dinner service typical of those used by the sultans. The sultan’s food was prepared in a separate kitchen, the Kushane, or Birdhouse.