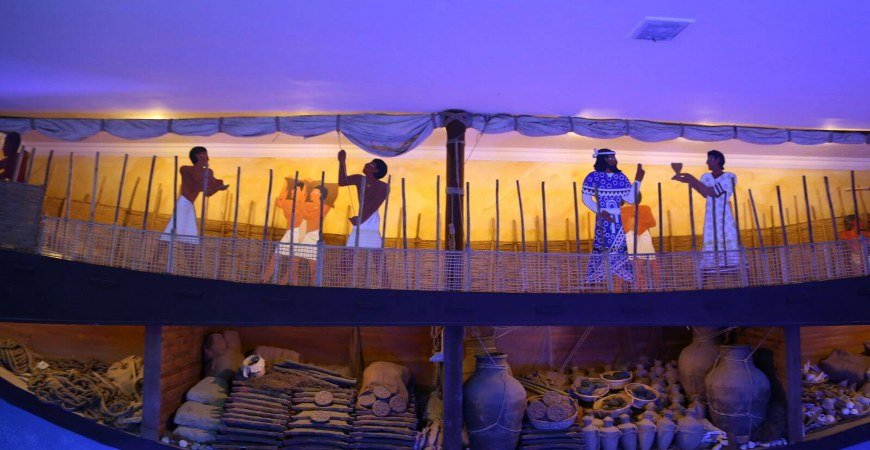 For many years sponge divers have collected sponges from the shores of the Aegean. It is a traditional trade by which they earn their living. Byways and means are known only to them, they dive to depths of forty fathoms and gather up raw sponges, which they then bring to shore and trample on to make usable. While searching for sponges they often come across the rotted hulk of an old wrecked ship and the scattered goods which it was carrying. In 1953 an experienced Marmaris sponge diver was swimming east of Bozburun near Kizilada when twenty fathoms below the surface on the sea bed he saw a rusty bronze object. With difficulty, he carried it to the surface and took it to Marmaris. It was an 81 cm. high statue of a woman. The statute was taken to Izmir Archaeological Museum, where it was patiently cleaned. It turned out to be an astonishingly beautiful work of art. The statue was cut off at the waist, perhaps being half of an originally full-length statue. Her breast and shoulders were covered with a fine cloth and her head also covered with cloth which fell to her shoulders. She had a soft smile which made her resemble the Mona Lisa in the Paris Louvre. Unfortunately the top of her head and right shoulder had rotted, but even so disfigured she lost none of her beauty. Archaeologists came to the conclusion that this was a statue of Demeter made in the Classical period during the fourth century BC. At that time Demeter had been the Goddess of Fertility in Anatolia, particular devotion and respect being accorded her in the coastal cities of Marmaris, Datca and Bodrum Turkey.
With the discovery of the statue of Demeter interest in the Aegean coast from Fenike to Bodrum increased. Sponge divers found amphoras, statues and other historical objects from the seas of this region, and they began to be gathered in the Museum of Underwater Works which was being established in Bodrum Castle at that time. However, the sponge divers without special equipment were despoiling the wrecks and doing more harm than good. It was immediately forbidden to search the wrecks, and in 1961 equipped with modern equipment systematic underwater exploration began near Bodrum Turkey, conducted by an underwater archaeological team led by Dr. George Bass professor of archaeology at Pennsylvania University. These productive searches are continuing today. Parts of ships, brass ingots which were used as money, pitchers, dishes, statues, stone anchors, steel yards, coins and all other findings were placed in the Bodrum Museum of Underwater Works which was opened to the public in 1964. This museum is one of the few museums of underwater findings in the world. The museum also contains works from the Mycenean civilization found in archaeological excavations. Searches are still going on and the findings enrichening the contents of the museum.