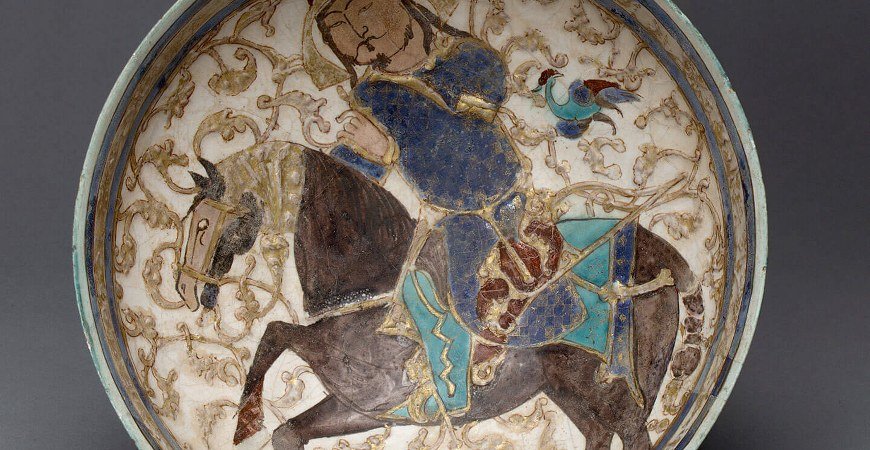 Although the Museum of Turkish and Islamic Art ‘which was established in the Suleymaniye Imaret in 1914 contains a rich collection of Turkish works of art, it is not visited as much or so well known as Topkapi Palace. Yet this museum contains not only Ottoman period works but also works dating from the Seljuk and Beylik periods in Anatolia. Thus it presents a complete cross section of Anatolian Turkish culture. Here you can see the finest examples of Seljuk tiles, prize examples of carved wooden works, the oldest carpets and gilded manuscripts from the Seljuk period. Among these works is a carved wooden Seljuk period lectern, whose equal is in the Pergamon Museum in East Berlin. Two similar to it is in Konya Mevlana Museum.
Only four Seljuk period lecterns remain to us after 250 years of Seljuk rule. There were probably others which did not survive to enter museums.
These lecterns which were used for reading the Koran or other books had two feet and opened and shut. A person sitting cross-legged would open the lectern and place his book on it. They were used not only in mosques but also in schools and homes. They prevented the book from. being opened while horizontal thus saving it from damage. During the Seljuk period, they were usually made of ‘walnut or ebony wood and their surfaces decorated with carvings and inlaid designs. Later on, these lecterns were inlaid with ivory, mother of pearl, gold, and silver.
The First Lectern is in the Istanbul Museum of Turkish and Islamic Art. In 1911 it Was brought from the Tomb of the Seljuk sultans in Konya to the Trust Museum in Istanbul which was newly being established at that time, and at first displayed in the Tiled Pavillion. The Sulus script writing in relief on the lectern records that it ‘was made for the Seljuk Sultan Izzeddin Keykavus the Second around 1258. The lectern is decorated with carved Seljuk motifs.
The Second Lectern is in Konya Mevlana Museum. According to the writing in relief upon it was presented to the Mevlana Tomb in 1279 by Cemaleddin Mubarak a close friend of the Seljuk Grand Vizier of the time Sahip Ata Fahreddin Ali. Mubarak, who also donated the gilded Mesnevi which is among the masterpieces in the Konya Mevlana Museum, had this lectern made by the greatest masters of the time and presented it to the Tombs of Mevlana 6 years after Mevlana’s death. The lectern is made of walnut and is 95 cm. high and 43 cm. wide. Its outer surfaces are decorated with raised Seljuk motifs while its inner surfaces are decorated with lacquered gilding and colored designs, and a panel on which is depicted a two-headed eagle, the coat of arms of the Seljuk sultans, surrounded by lions.
The Third Seljuk Lectern is also in Konya Mevlana. Museum. This resembles the second and carved on it are words of the Prophet. One of the sentences reads “The sins of those who love scientists and scholars cannot be written while they still live”. The Fourth Lectern is in the section of Turkish and Islamic Art in the Pergamon Museum in East Berlin. According to the museum records this lectern was taken from the Alaeddin Mosque and brought to Berlin in 1907. It is a metre in height and 50 cm. wide and carved out of walnut wood. It is decorated with writing and Seljuk motifs. The Cufic and Sulus inscriptions are verses from the Koran. These four lecterns are masterpieces of the art of woodwork in the Anatolian Seljuk period. They have been exhibited, both together and separately in several countries of the world, including America, France and Germany. Lecterns made later in the Beylik and Ottoman periods, which are now in museums of mosques may not be able to equal the craftsmanship of these lecterns, but there are still many among them of great artistic value. Particularly the Ottoman lecterns in the Istanbul Museum of Turkish and Islamic Art and Topkapi Palace cannot be denied the right to be called masterpieces. And as well as the lecterns the Seljuk pulpits, platforms, sarcophagi and lattices should not be forgotten when compiling a list of the masterpieces of the Turkish art of wood carving.