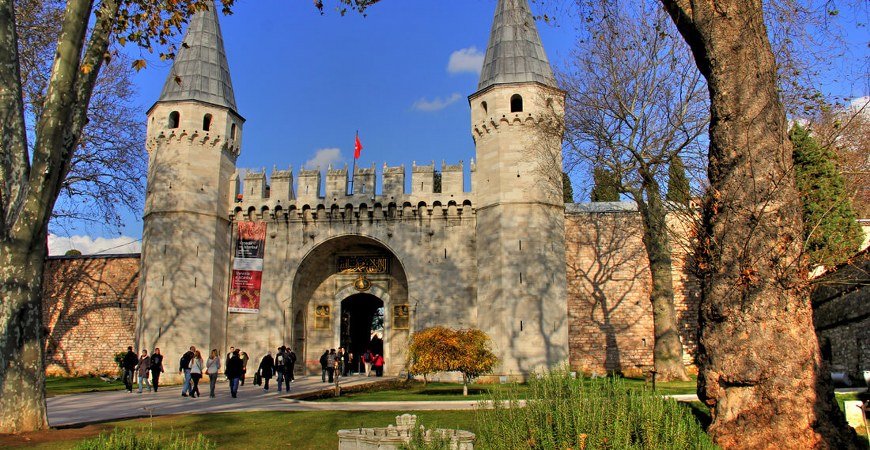 Gate Of The Acias:
This gate is also known as the Gate of Felicity, and the Gate of Petitions. Slender marble columns pit sport, its roof. It was built during the reign of Selim Ill. On the accession of each new sultan, a ceremony took place here. Seated upon a throne of gold the new sultan took the oath of allegiance. These ceremony wits continued up to the accession of the last monarch. Another ceremony took place at this- same gate every Bityram. Here, too, outdoor meetings of the Divan wore occasionally held, and violent incidents of Ottoman history took place. Another ceremony, held here whenever war was declared, was that of the handling of the Banner of the Prophet to the commander of Ilic armies The guarding of this gate was entrusted II) the Ak, or White, Agas. Beyond it lay the living quarters of the Aga of the Gates on one side, and the dormitories of the White Agas on the other. This gate Acias to the third court, known as Enderun (Inner Court). From here on one was in the palace proper. The structures leading to this court were known as It’s run or outer section.

Audience Chamber:
This colonnaded hall was built in the time of the Conqueror but altered several times until finally, after a fire in the nineteenth century, it lost its original character completely when a partition was put in. In this hall, the viziers submitted their reports to the sultan, and foreign ambassadors were received according to a strict protocol. On such special days, the passages leading to the hall were hung with thin gold-embroidered curtains, and precious rugs and tapestries were placed upon the floor. Above the throne were suspended enormous emeralds, and the cushions of the throne were embroidered with emeralds and pearls. In 1808 Alemdar Mustafa Pasha led a revolt against the palace and penetrated as far as the Hall of Petitions, only to find there the bloody corpse of Selim III, whom he had been attempting to replace on the throne, who had been murdered in the harem. The throne platform and the fireplace in the Hall of Petitions date from the time of Mehmet the Conqueror.