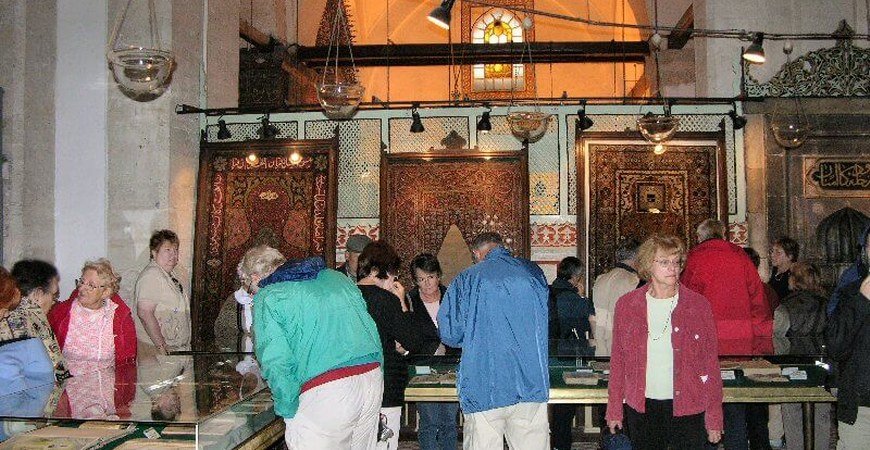 Those who visit the Mevlana Museum in Konya where many masterpieces of Turkish craftsmanship are exhibited gaze in wonder at a prayer carpet which resembles a flower garden displayed on the wall in the Mescid. Although the museum contains several four hundred and five hundred-year-old Anatolian prayer carpets, it is this one which draws the most interest. The plaque underneath reads: “This prayer carpet was sent to Mevlana as a wedding present by the Seljuk Sultan Alaeddin Keykubad I.” This single sentence attracts great interest and increases the value of the prayer carpet. According to written sources, Mevlana Celaleddin emigrated from Belh to Anatolia settling in Karaman (Larende), where he married Gevher Hatun, the daughter of Serefeddin Lala a disciple of his father Bahaeddin Veled. The year was 1225 and Sultan Alaeddin Keykubad I was on the throne. We do not know ‘whether Sultan Alaeddin Keykubad sent a wedding present to Mevlana or not, only that upon the Sultan’s invitation Mevlana moved to Konya from Karaman where he had lived with his father and family for 7 years. The prayer carpet, supposedly a wedding present to Mevlana, is medium sized and made of ‘wool. The upper border and half the sides have a verse from the Koran in Sulus writing, and the part where you touch your forehead has written: “Allahu Akbar” (Almighty God). The rest of the border is decorated with rumi motifs and flowers in red, yellow and dark blue. For years the carpet was kept in a box in the Mevlana Dargah with Mevlana’s clothes and looked after with care although it has worn in the places where it has been folded. In 1926 when the possessions of the Dergah were handed over to the museum in the presence of a delegation of experts, and each item recorded, this carpet was listed in the inventory as The wedding present of Sultan Alaeddin Kaykubad to Mevlana”. Was this really a Seljuk period work, or had it been ‘woven at a later date, brought to the Mevlana Dergah and claimed to be Mevlana’s? One is al-ways faced with this question. Many of the objects in the museums of the world are said to be the possessions of great men. It is normal. But although most of them are truly what is claimed there are others of which no one can be sure. It is hard to rely entirely on rumor when there is no documentation to back it up. However, this prayer carpet whether it is really Mevlana’s or not still deserves a prominent place in the museum as a masterpiece of art. It is a traditional Turkish palace carpet whose colors and designs reflect those of the XVII century, such a beautiful prayer carpet. The fact that it is said to belong to such a great man as the immortal Mevlana enhances it with a spiritual value.