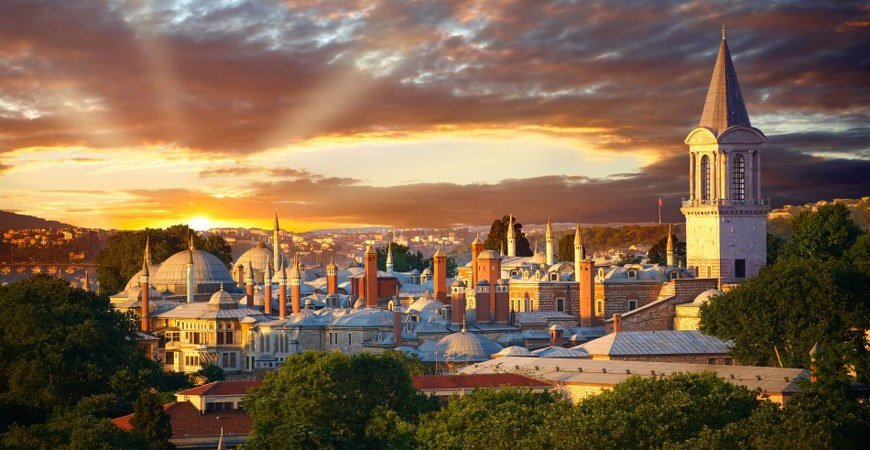 The Enderun Library
Going out from the Audience Chamber the visitor faces a many-domed marble building built by Ahmet III in 1718 in order to house the palace library. Previously on the same spot stood a kiosk with fountains, built by Selim II. The plaster reliefs on the domes and vaults of this building are among the masterpieces of the period. Its walls are decorated with sixteenth-century tiles brought from the Yali of Kara Mustafa Pasha. There are 4787 manuscripts in the library, of which are in ancient Greek and Latin.If those latter are adorned with miniatures and drawings. The majority of the remainder are in Arab-i and many are rare works on history, geography, intoplicine and religious mysticism.

The Enderun School
This building, where many grantrifitteftrIfigh admirals and important statesmen were trained and in whose rooms artists and musicians gained experience, has seen many transformations. It was burnt down in 1857 and restored only within recent years. It is now used for Museum offices. In the vicinity of this building was a small pavilion also used as a classroom. The school of Galata Saray was founded by Bayezit II as an outlet for this school.

The Commissary
This building was originally constructed during the reign of the Conqueror, but was restored in flu nineteenth century and is now used as an office building.

The Sofa Mosque
Underneath the Commissary is a vaulted passage which leads to the fourth court. Here stands a simple mosque with a single minaret, built in 1858.

The Iftariye
This open summer kiosk, which has a magnificent view over theGolden Horn and the entire city, was built in 1640 and consists of a bronze dome supported by four bronze columns. Inscriptions and decorations in gilt relief ornament it. Here congratulations were received and circumcisions, fasts, and entertainments took place.