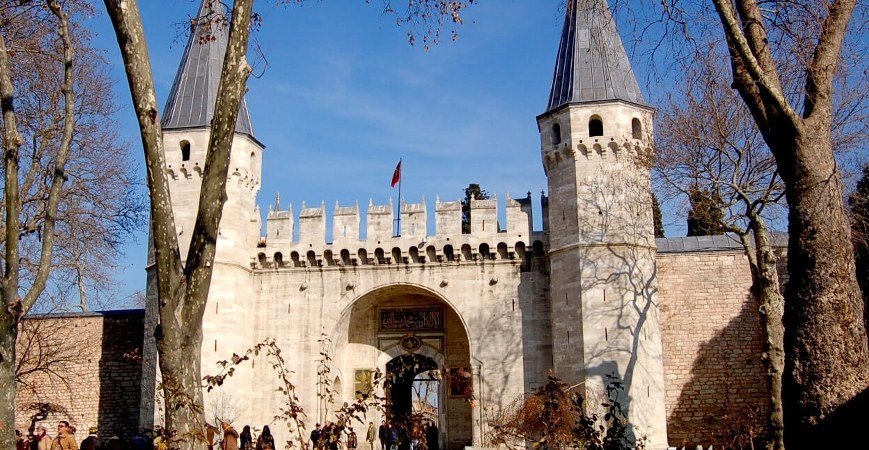 The Sections of Topkapi Palace Museum in Istanbul,

The Pool:
There are many pools in the Saray grounds but this particular one, situated in front of the Revan and Bagdad Kiosks and of the Apartment of the Mantle of Felicity, is of special note, because of the attractiveness of the jet in the middle and the jets-d’eau on either side.

Circumcision Room:
This room, built in the time of Sultan Ibrahim is very simple in plan, but its marble door frames, the beautiful tile panels of different periods which ornament its walls and its charming wall fountains carved with tulips render it well worth a visit.

Guards’ Treasury:
In this building, which dates from the Conqueror, swords and aigrettes are kept. The Bagdad Kiosk, interior view.

Apartment Of The Mantle Of Felicity:
This building, which is similar to the Hall of Petitions in plan and which is surrounded by a portico, is thought to have been originally constructed in the days of the Conqueror. The extremely valuable tiles on its. walls, however, were placed there during Murat II’s ill The building was restored several times, down the lime of Mahmut II, and the Prophet’s Mantle was moved from the lower story where it was kept, to a building constructed beside the dormitory. In the apartment of the Mantle of Felicity were kept Hilly the Prophet’s mantle, but also his bow, his words, his standard and his epistles, as well as words and other historical relics belonging to certain air disciples. The scabbards of these swords are examples of magnificent workmanship.

Section Of Turkish Embroideries:
This was the old Treasury and assumed its present form in the nineteenth century. The three halls of the I tried. floor house a collection of Turkish embroideries ‘winning with the sixteenth century. The success in color and composition achieved in the embroideries made in the villages illustrated the Turks, innate artistic ability. Nevertheless, the collection also includes articles specially made for the palace and worked in gold thread and colored silks by the best embroiderers of their time: belts, handkerchiefs, gowns, covers, napkins, towels, prayer rugs, pillowcases, turban cloths, moneybags, etc. etc. The second hall contains embroidered leather works, and the third some of the tents found in the palace depots.