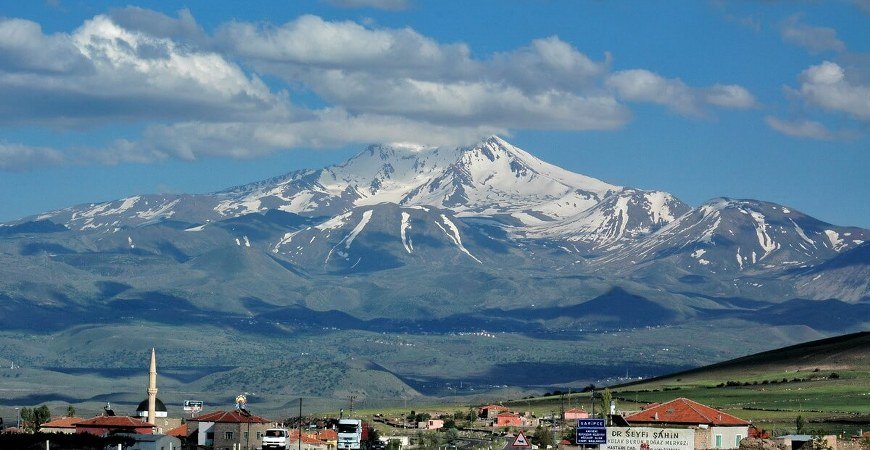 Kayseri is one of the larger towns of central Anatolia (pop. 207.000). It adjoins the provinces of Yozgat and Sivas in the north, of Adana in the south, of Maras in the east and of Nigde and Nevphir in the west. The history of Mazaka (as. Kayseri was called in earlier times) goes back to 2000 B.C. The terracotta tablets with the cuneiform script on them, the statues and other artifacts which were unearthed at KOltepe situated 22 km. to the northeast of Kayseri are proof of its importance as a Hittite town. These artifacts, kept now in the museums of Kayseri and KCiltepe, are the first of their kind discovered in Anatolia. We understand from the tablets that Kayseri was an important Hittite center of commerce and that even Assyrian merchants came here to trade. Kayseri was ruled also by the Romans, and later by the Byzantines. Various monuments and temples were built here in Roman times and coins were minted in the name of the Roman emperor; such coins, most of them bronze, are frequently found in the region. After the spread throughout Cappadocia, including Kayseri, of Christianity, all such temples and monuments were destroyed by the Byzantines. When the Byzantine Empire started to decline, various races invaded the Kayseri region. During the advance of Islam in this direction, the region was invaded several times by Arab armies (690-726 A.D.). After the battle of Manzikert (1071) the Seljukids captured it. Later it was conquered by Emir Gazi. The Seljuk sultan Kilij Arslan II took Kayseri back from the Danishmend in 1174, and under his rule, the town flourished and many buildings were added to it. Most of the still surviving monuments in Kayseri date back from this period the mausoleum of Hunat Hatun, Hatun mosque, the medrese of Hunat Hatun, the “revolving dome”, Kilij Arslan mosque, K010k mosque, Kurshunlu mosque are the more important among them. Beside Kayseri, the Seljuk’s had baths, inns, medreses, mosques, and caravanserais built in many other towns. They are all decorated with beautiful works of art. The finest building surviving from the Seljukid period is the Sultan Han (Inn), 50 km. from Kayseri, on the Sivas highway. It was built by Aladdin Keykubad at a time when Seljuk’s art had reached its zenith; the carvings at the main gate and on the chapel are particularly beautiful. Kilij Arslan II later divided his kingdom among his sons and he himself went into retirement at Konya. But the power struggle among his sons, which followed this partition, grew to such dimensions that they even marched against him. Kayseri was added to the Ottoman state in 1399 by Yildirim Beyazid; after his defeat at the Battle of Ankara, Timur (Tamerlane) destroyed the whole town, razing even the citadel to the ground. Kayseri was later ruled by the Dulkadirogullai and the Karamanogullari; it was the latter who rebuilt the citadel. After the battle between the Karaman ruler, Pir Ahmed, and the Ottoman sultan, Mehmed the Conqueror, Kayseri again became part of Ottoman territory but fell into neglect until the foundation of the Republic, since which time it has been enjoying a continual growth.