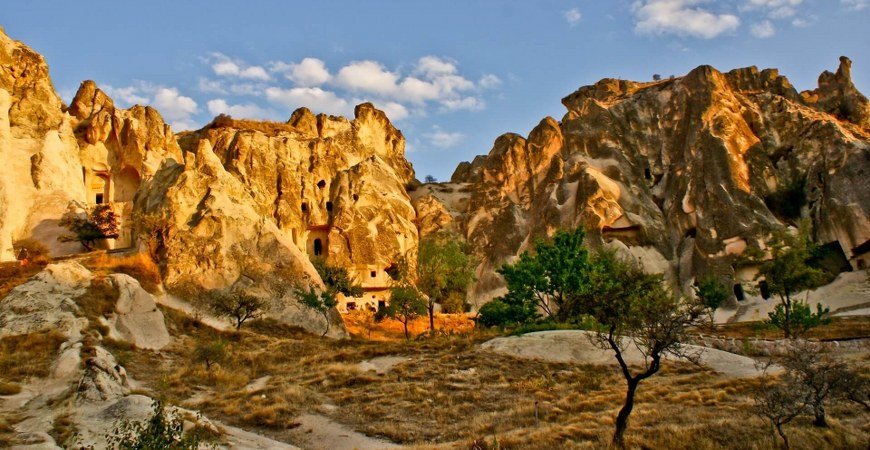 Nigde
Nigde is a town (pop. 30.000) in the southern part of Cappadocia, and the town went into a decline. Today, the main places of interest rest to the west of the road. It also dates from the Hittite period; from tablets found in the village of Andaval in the province of Nigde, and now preserved in the Archaeological Museum in Ankara, we learn that they called it Nahita. In 1976 a basrelief made of hard black stone depicting a Hittite god was unearthed in Nigde at a construction site near Kigili Mosque and is now in the local museum. On the stone, there is a cuneiform script, a figure of a God holding an ax in his right hand and a lightning in his left. We see grapes on the lower left-hand corner and a sheaf of wheat on the lower right-hand corner. After 710 B.C. NiOde fell under the Phrygian rule and various artifacts of that period attest to this. Though the Phrygians were followed by the Romans, very little has been found indicating their presence. In 53 A.D. Christianity began to expand fast in the region, but Roman persecution of Christians caused the converts to build underground cities at Misli, Tirhan, Hasakoy, Orhanli and Edikli in the vicinity of Nigde, similar to those at Derinkuyu, Kaymakli, KiraOcapr, BelOren, KizilOren, Tilkoy, Cekmi, Orentepe, Goble, Cakilli, Dogala, Suvermez. I believe that, apart from these, there are about hundred underground cities in Cappadocia, serving the double purpose of places of refuge for Christians and of centers for missionary work. In 313 emperor Constantine granted recognition to this religion which started propagating all over the world.
Nigde was part of the Byzantine territory from 395 to 1075, after which date it remained in Seljukid hands until the middle of the XIII century. Upon the accession of Aladdin Keykubad I to the Seljukid throne, the governor of Nigde, Zeyneddin Beshare, had a mosque built in the sultan’s name. This mosque, which is still in use, is known as Aladdin Mosque and is noted for the stone carvings, both on the interior and the exterior walls, and for its mihrab, mimbar, and main door. The reign of Aladdin Keykubad (1219-1237) is the most glorious period of the Seljukid State, during which time medreses, inns, puplic baths, mosques, and caravanserais were built and decorated with beautiful examples of their art. With Aladdin’s successor, Giyaseddin Keyhusrev, the Anatolian Seljukid state began to decline. During this period the Mongols, at that time in possession of Persia and the Caucasus region, started threatening also the already weakened Seljukid State and finally took this opportunity to invade Anatolia. In 1243 at Koseda0 near Sivas the Seljukid army was defeated and the Mongols imposed an annual tax on them and later annexed the territory. A number of Turkman princes reacted by declaring their independence from the Seljukids and NiOde was held successively by the Ilhanids, the Karamanlids, and the Ottomans. It was also invaded by the Sasanids and the Arabs. The devastation caused by these invasions and wars was too vast to be repaired and the town went into a decline. Today, the main places of interest for the tourist in Nigde are:
1 — Aladdin Mosque
2 — Sungur Bey Mosque
3 — Rahmaniye Mosque
4 — Various Mausolea
5 — Ak Medrese
6 — The Citadel.

Eski Gumus Nigde
Six km. to the north-east of Nigde, there lies a Byzantine monastery carved into the rocks. The courtyard in front has rooms to its west and southeast, and the monastery to its north. The church dates from the X or the XI century; its dome rests on four large columns. It has three niches in its eastern part and a chapel in the part facing the north. The niches are decorated with pictures of Christ, S. Mary, and the Saints, another niche has a lifelike fresco of Virgin Mary with Christ in her arms. In the south of the courtyard, there are entrances to underground passages which are now blocked.